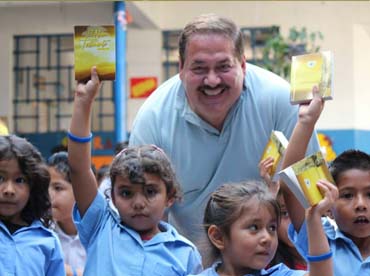 Straight Path Ministries is a non-denominational, non-profit organization established in October 1992. It is an evangelical ministry that works to fulfill Jesus’ final command to believers; “Go into all the world and preach the gospel to all creation” (Mark 16:15). One of its main functions is foreign missions; assisting, encouraging and supporting Christians to go out into the world. The ministry helps raise support for individuals and their needed supplies (Bibles, literature, films, etc). Straight Path Ministries, also known as SPM, sponsors specific short term trips to help Christians get introduced to foreign mission fields. Since formally beginning in 1992, short term trips have been taken by members of SPM with believers from all different denominations to over 140 trips to various countries.

Since its beginning, hundreds of believers from many different denominations have participated in short term trips to multiple countries including Russia, Cuba, India, El Salvador, Mexico, Haiti, Peru, Honduras, Guatemala, Mexico, Romania, Ecuador, and various countries in the CIS with Straight Path.

Another facet of ministry is reaching out to the poor and needy both nationally and internationally. This is done through sending clothes, toys, Bibles, and needed supplies to various countries, as well as local outreach in the New York area which is an ongoing part of the ministry.

Furthermore, SPM publishes a free quarterly newsletter featuring articles to teach and encourage believers, inform Christians of missionary opportunities and evangelize the unsaved. The computerized electronic form of the newsletter goes throughout the world. SPM also has its own website in English and Spanish.

The director of SPM is Joseph Nigro, a pastor, missionary, Bible teacher, and writer who preaches and teaches locally as well as other countries. He has been involved in short term foreign missions for 31 years.

Register yourself for mission trip

Our vision is that you will find your calling in Christ, whether it is being a missionary in another country or a missionary at home.